What happens when WebRTC shifts to TURN over TCP 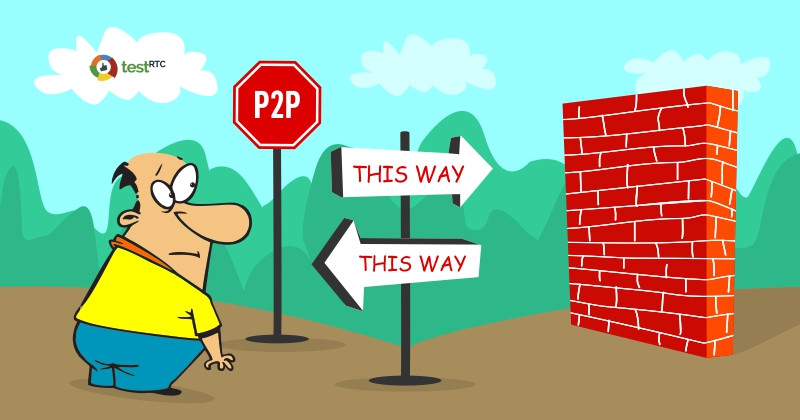 You wouldn’t believe how TURN over TCP changes the behavior of WebRTC on the network.

I’ve written this on BlogGeek.me about the importance of using TURN and not relying on public IP addresses. What I didn’t cover in that article was how TURN over TCP changes the behavior we end up seeing on the network.

This is why I took the time to sit down with AppRTC (my usual go-to service for such examples), used a 1080p resolution camera input, configure my network around it using testRTC and check what happens in the final reports we get.

What I want to share here are 4 different network conditions: Let’s first figure out the baseline for this comparison. This is going to be AppRTC, 1:1 call, with no network impairments and no use of TURN whatsoever.

Oh – and I forced the use of VP8 on all calls while at it. We will focus on the video stats, because there’s a lot more data in them. Our outgoing bitrate is around 2.5Mbps while the incoming one is around 2.3Mbps – it has to do with the timing of how we calculate things in testRTC. With longer calls, it would average at 2.5Mbps in both directions.

They are here for reference. Once we will analyze the other scenarios, we will refer back to this one.

What we will be interested in will mainly be bitrate, packet loss and delay graphs.

#2 – TURN over TCP call with No Packet Loss

At first glance, I was rather put down by the results I’ve seen on this one – until I dug into it a bit deeper. I forced TCP relay by blocking all UDP traffic in our machines. 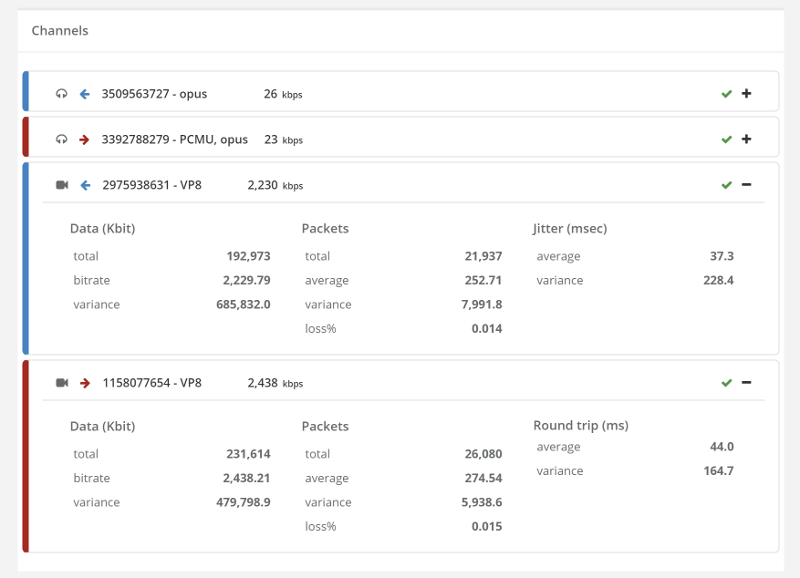 This time, we have slightly lower bitrates – in the vicinity of 2.4Mbps outgoing and 2.2Mbps incoming.

This can be related to the additional TURN leg, its network and configuration – or to the overhead introduced by using TCP for the media instead of UDP.

The average Round trip and Jitter vaues are slightly higher than those we had without the need for TURN over UDP – a price we’re paying for relaying the media (and using TCP).

The graphs show something interesting, but nothing to “write home about”:

I am leaning towards the first reason, but would love to understand the real reason if you know it.

The second interesting thing is the area in the green. That interesting “hump” we have for the video, where we have a jump of almost a full 1Mbps that goes back down later? That hump also coincides with packet loss reporting at the beginning of it – something that is weird as well – remember that TCP doesn’t lose packets – it re-transmits them.

This is most probably due to the fact that after bitstream got stabilized on the outgoing side, there’s the extra data we tried pushing into the channel that needs to pass through before we can continue. And if you have to ask – I tried a longer 5 minutes session. That hump didn’t appear again.

Last, but not least, we have the average delay graph. It peaks at 100ms and drops down to around 45ms.

To sum things up:

TURN over TCP causes WebRTC sessions to stabilize later on the available bitrate.

Until now, we’ve seen calls on clean traffic. What happens when we add some spice into the mix?

What we’ll be doing in the next two sessions is simulate DSL connections, adding 0.5% packet loss. First, we go back to our P2P call – we’re not going to force TURN in any way. Our bitrate skyrocketed. We’re now at over 3Mbps for the same type of content because of 0.5% packet loss. WebRTC saw the opportunity to pump more bits to deal with the network and so it did. And since we didn’t really limit it in this test – it took the right approach.

I double checked the screenshots of our media – they seemed just fine: Lets dig a bit deeper into the video charts:

Remember these results for our final test scenario.

We now use the same configuration, but force TURN over TCP over the browsers.

Here’s what we got: 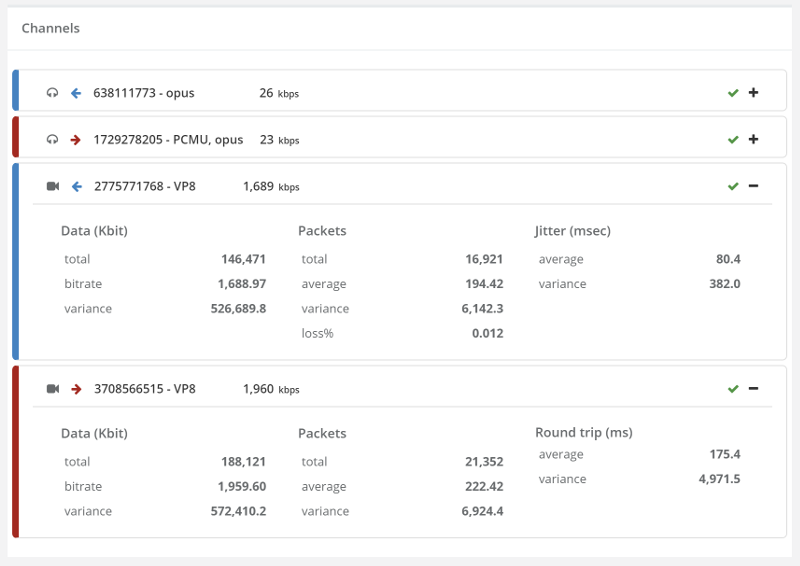 Bitrates are lower than 2Mbps, whereas on without forcing TURN they were at around 3Mbps.

Ugliness ensues when we glance at the video charts…

Things don’t really stabilize… at least not in a 90 seconds period of a session.

I guess it is mainly due to the nature of TCP and how it handles packet losses. Which brings me to the other thing – the packet loss chart seems especially “clean”. There are almost no packet losses. That’s because TCP hides that and re-transmit everything so as not to lose packets. It also means that we have utilization of bitrate that is way higher than the 1.9Mbps – it is just not available for WebRTC – and in most cases, these re-tramsnissions don’t really help WebRTC at all as they come too late to play them back anyway.

What did we see?

I’ll try to sum it in two sentences:

And if you are interested about the most likely ICE candidate to connect, then checkout Fippo’s latest data nerding post.

Looks like the worst possible combination is to sit behind a corporate firewall and be on a shoddy link (high loss wireless in the office anyone?). This is why I’ve had more success on 3G links with a WebRTC call than on corporate wireless networks – funny it should have come to that!

I hear you Silvia!

At testRTC we enable simulating both these scenarios you describe – shoddy WiFi behind an uncooperative firewall as well as 3G connections.

We are testing a web rtc application. What is the best way to simulate a shoddy WIFI with a strict firewall ?
Appreciate your response.

We have that as part of our service.

We’ve built it on top of a mixture of low level Linux capabilities allowing us to configure the machine’s behavior as if it was configured on a specific type of network.

[…] of doing realtime media over TCP is that packet loss can lead to resends and increased delay. Tsahi described this over at TestRTC a while ago, showing the impact on bitrate and other […]

thanks for the detailed tests you make public.

I get questions by people like “Can this WebRTC service work if UDP is restricted ? Can this work over TCP ? Can your system use TURN ?

I really get frustrated with these questions.
To my knowledge, WebRTC, like SIP and H.323, is meant to work using UDP. You know the reasons. UDP is the protocol suitable for realtime data, whereas TCP is slow and uses acknowledgements. It is better to discard a video packet than to send it later, there is no use for it.

Searching for WebRTC definitions and for diagrams on the Internet always gives me back the stack of the protocol which clearly shows media over UDP.
I have not found any place where WebRTC is defined (I guess Google can only define it) as over TCP.

So, when people ask me, I am inclined to answer that using TCP / TURN is a workaround which is not correct.
I even think of saying “This is the wrong setup, WebRTC is defined using UDP” or even saying “you are not compliant to the WebRTC specification”…

I believe that WebRTC over TURN / TCP is at least bad practice. What do you think about the above ?
Do you find it “wrong” like me or do you see it as an acceptable practice ?

For me TCP or TLS are just means to an end. If a network blocks UDP, then by all means – use TURN/TCP. Do you prefer the alternative of having no connection to having a connection that isn’t the best it could be?

Under the same line of thought, why not limit users who don’t have HD cameras? Or people who aren’t using a decent headset. Or not connect those who don’t have high speed internet?

As to the specification, WebRTC uses TURN to traverse through firewalls and allows using TURN/TCP and TURN/TLS – which are standard practice for most.

WebRTC (and myself) would rather use communications to happen over UDP, but if that’s unavailable, then TCP is the next best thing.

We are setting up a TURN server now and trying to access a WebRTC. However, we are always getting a P2P UDP connection – and whenever we block UDP ports – we never get relayed to TCP.

We are accessing the WebRTC stream via browser (we have a web-based solution). Is it true that this is currently a browser limitation? Is it a known issue that browsers are currently not able to use a TURN server’s TCP relay?

Browsers most definitely can work with TURN/TCP. The best reason for your problem is a configuration issue.
Make sure the iceServers on the peer connection are correct and try them out in this sample: https://webrtc.github.io/samples/src/content/peerconnection/trickle-ice/