How do you find the current active connection in webrtc-internals? 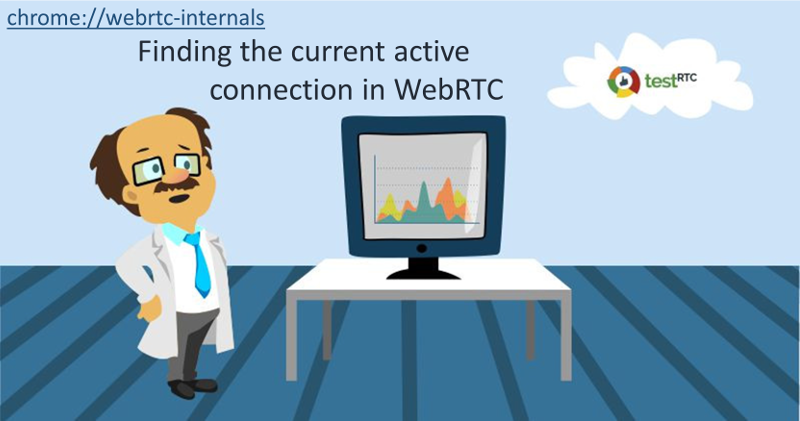 Today, we want to help you find the current active connection in webrtc-internals.

To make this article as accurate as possible, I decided to go to my source of truth for the low level stuff related to WebRTC – Philipp Hancke, also known as fippo or hcornflower. This in a way, is a joint article we’ve put together.

Why is this of any importance?

While you can always go and check the statistics on your connection and channels, there are times when what you really want to do is understand HOW you got connected.

WebRTC allows connections to take one of 3 main routes: Which one did you use for this connection? Did this call end up going via TURN over TCP?

There are two times when this will be useful to us:

What is an active connection in WebRTC?

WebRTC uses the ICE protocol (described in RFC 5245 if you are really keen on the details) to find a way to connect two peers which may be behind NAT routers. To establish a connection, each peer gathers a number of candidates.

There are host candidates which represent local ip addresses and ports. These have a “typ host” when you expand the onicecandidate or addIceCandidate events in webrtc-internals.

Similarly, there are serverreflexive candidates where the peer asked a STUN server for its public ip address. These will have a “typ srflx” and an additional raddr field that shows the local ip address where this originated.

Last but not least there are relay candidates. Here, the peer asked a TURN server to open a port and relay traffic. These will show up in the onicecandidate and addIceCandidate with a “typ relay”. To make things more difficult, WebRTC clients can use either UDP, TCP or TLS to connect to the TURN server.

Let’s assume that you see a number of onicecandidate and addIceCandidate calls in webrtc-internals. There are conditions where this does not happen but typically WebRTC will use a technique known as “trickle ice”.

Once candidates have been exchanged, the WebRTC engine forms pairs of local and remote candidates and starts sending STUN packets to check if it gets a response. While the details of this are very much hidden from the application we can observe what is going on in webrtc-internals (and the getStats() API). The screenshot above was taken from Wireshark, a tool that can be used to sniff the local network. It shows a TURN message flowing in a session during the connection setup stage.

How do we find the current active connection in webrtc-internals?

Open one of the WebRTC samples that establishes a local peer-to-peer connection, mute your speaker and start a call. Also open chrome://webrtc-internals. Now let’s see if we can find out together the active connection.

Now that we’re running the “local peer-to-peer connection” sample off the WebRTC samples repository, there’s something to remember – it does not use STUN and TURN servers, so the number of candidates exchanged will be quite small. We’ve selected it on purpose, so we won’t have so much clutter to go over. What you will see is just four candidates in the onicecandidate event of the first connection (because of some rules about rtcp-mux and BUNDLE) and a single candidate in the addIceCandidate event. Now which of those candidate pairs is used? Fortunately webrtc-internals gives up a hint by showing the active candidate pair in bold. Typically the id of this will be Conn-audio-1-0 (with BUNDLE, the same candidate pair and connection is used also for the video). Let’s expand this and see why it is marked as bold: 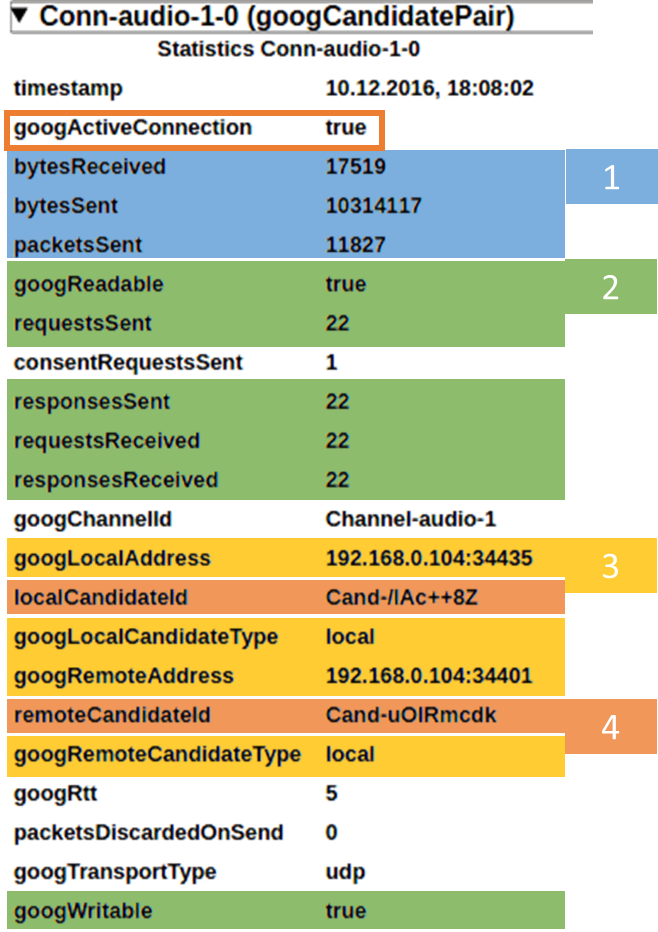 The most important thing here is the googActiveConnection attribute which is true for the currently active connection and false for all others. We see quite a number of attributes here and while some of them have been discussed in the previous post let us repeat what we see here:

Lets search for the local and remote candidates specified in the localCandidateId and remoteCandidateId fields. Again this is pretty easy since there is only a single candidate pair. 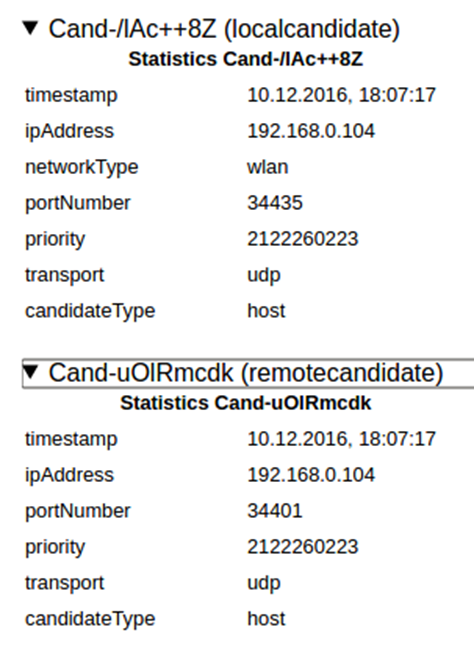 The most interesting field here is the priority. When the implementation following the definition of the priority from RFC 5245, the highest 8 bit specify the type preference (= you’ll need to shift the priority attribute right >> 24 bits). This is of particular interest since for local candidates with a candidateType relay we can figure out the transport used between the client and the TURN server. Chrome uses a type preference of 2 for relay candidates allocated over TURN/UDP, 1 for TURN/TCP and 0 for TURN/TLS. Calculating priorities this way means that relayed connections will have a lower priority than any non-relayed candidates and that TURN servers will only be used as a fallback. As we have described previously, using TURN/TCP (or TURN/TLS) changes the behaviour of the WebRTC quite drastically. If you find this hard to understand do not worry, the specification is currently updated to address this!

What happens during an ICE restart?

So far we have been using a very simple example. Let’s make things more complicated with one of Philipp’s favorite topics, ICE restarts. Navigate away from the previous sample and go to this sample. Make a call. You will see an active candidate pair on chrome://webrtc-internals. Click on the “Restart ICE” button. Note how the data on the candidate pair Conn-audio-1-0 has changed, the ip addresses have changed and the STUN counters have been reset. And the data we have seen previously is now (usually) on a report with the identifier Conn-audio-1-1. The candidate pair is not used any longer but will stick around in getStats (and consequently webrtc-internals).

This is somewhat unexpected (and lead to filing an issue). It seems like the underlying webrtc.org library is renaming the reports in a way such that the active candidate always has the id Conn-audio-1-0. It has behaved like this for ages but this has some disadvantages. Among other things, it is not safe to assume that the number of bytesSent will always increase as it could reset, similar to a bug resetting the bytesSent counters on the reports with a type of ssrc that we have seen in the last post.

What have we learned so far?

We’ve only just started exploring webrtc-internals, and our plan is to continue working on them to create a series of articles that will act as the knowledge base around webrtc-internals.

Huge thanks for Fippo in assisting with this series!

I found The Missing chrome://webrtc-internals Documentation (thank you!)
trying to get a strophe.jingle-based plugin

I notice in your screenshot above, 201612-webrtc-connection-stats.png

I could never get to Conn-audio-1-0 until I ran the VPN tunnel on one of the peers.
I just thought I’d try it to separate external IPs.

Your examples would indicate that shared external IPs should not prevent P2P,
and previously I have been able to test with two clients behind the same NAT/firewall.

and because my STUN server and VPN are at the same IP (not localhost), that helped speed up one side of the transaction. I am not incorporating a TURN server at all.

How would I ascertain pre Conn-audio-1-0 latency, or other cause of ICEConnectionStateFailed?

John, I didn’t quite understand the problem or the question. Can you please try to explain it differently?

Testing with a laptop and a tablet:

With both peers on the same subnet I could not make a connection. They would start to try, but never get Conn-audio-1-0 status.

I enabled the OpenVPN client on the tablet only, and the laptop and tablet connected instantly on subsequent attempt.

I am trying to understand why.

Could the OpenVPN server and STUN server being on the same VPS speed up the negotiation, or is it something else?

On another note why does this blog show up as kind of a mobile-style even on desktop with huge screens? It feels really awkward (and the images show up quite weird also, so big and “zoomed in” inline with the paragraph)

Can i use STUN instead of TURN. if I use STUN will it use any bandwidth from server.

You need to use both. WebRTC will try to select the one that allows him to connect, favoring the use of STUN if it can (barring configuration mistakes or bugs in the implementation).