Nexmo found in testRTC a solution to solve its end-to-end media testing challenges for their Nexmo Voice API product, connecting PSTN to WebRTC and vice versa.

Nexmo is one of the top CPaaS vendors out there providing cloud communication APIs to developers, enabling enterprises to add communication capabilities into their products and applications.

One of Nexmo’s capabilities involves connecting voice calls between regular phone numbers (PSTN) to browsers (using WebRTC) and vice versa. This capability is part of the Nexmo Voice API.

Catering to so many customers with ongoing deployments to production means that Nexmo needs to take testing seriously. One of the things Nexmo did early on was introduce automated testing, using the pytest framework. Part of this automated testing includes a set of regression tests –  a huge amount of tests that provide very high test coverage. Regression tests get executed whenever the Nexmo team has a new version to release, but these tests can also be launched “on demand” by any engineer, they can also be triggered by the Jenkins CI pipeline upon a merge to a particular branch.

At Nexmo, development teams are in charge of the quality of their code, so there is no separate QA team.

In many cases, launching these regression tests first creates a new environment, where the Nexmo infrastructure is launched dynamically on cloud servers. This enables developers to run multiple test sessions in parallel, each in front of their own sandboxed environment, running a different version of the service.

When WebRTC was added to Nexmo Voice API, there was a need to extend the testing environment to include support for browsers and for WebRTC technology.

“When it comes to debugging, when something has gone wrong, testRTC is the first place we’d go look. There’s a lot of information there”

In both cases, their client side SDKs get loaded by a web page and tested as part of the scenario.

Nexmo ended up using testRTC as their tool of choice because it got the job done and it was possible to integrate it into their existing testing framework: This approach allowed Nexmo to integrate testRTC right into their current testing environment and test scripts.

The Voice API engineering team is a large oneAll these users have access to testRTC and they are able to launch regression tests that end up running testRTC scripts as well as using the testRTC dashboard to debug issues that are found.

The ability to have multiple users, each with their own credentials, running tests on demand when needed enabled increased productivity without dealing with coordination issues across the team members. The test results themselves get hosted on a single repository, accessible to the whole team, so all developers  can easily share faulty test results with the team .

Nexmo has got regression testing for WebRTC off the ground by using testRTC. It does so by integrating with the testRTC APIs, scheduling and launching tests on demand from Nexmo’s own test environment. The tests today are geared towards providing end-to-end validation of media and connectivity between the PSTN network and WebRTC. Validation that testRTC takes care of by default. 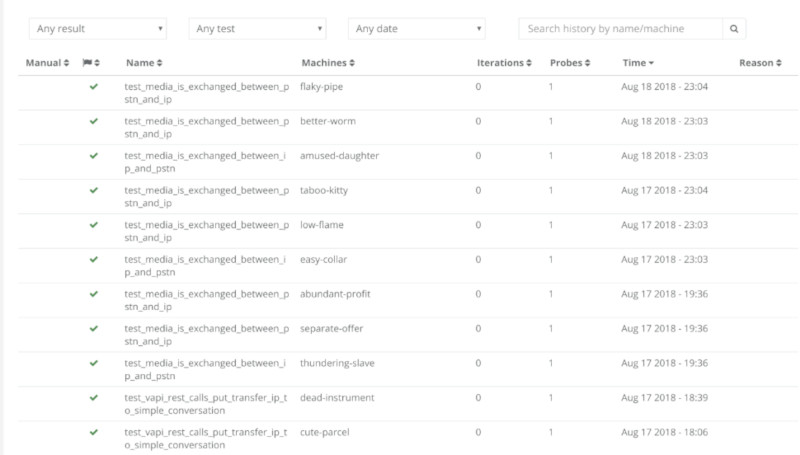 When things break, developers check the results collected by testRTC. As Jamie Chapman, Voice API engineer at Nexmo said: “When it comes to debugging, when something has gone wrong, testRTC is the first place we’d go look. There’s a lot of information there”.

testRTC takes screenshots during the test run, as well as upon failure. It collects browser logs and webrtc-internals dump files, visualizing it all and making it available for debugging purposes. This makes testRTC a valuable tool in the development process at Nexmo.

Nexmo is currently making use of the basic scripting capabilities of testRTC. It has invested in the API integration, but there is more that can be done.

Nexmo are planning to increase their use of testRTC in several ways in the near future: